Posted on December 7, 2022 by Andreas Pattichis

Global markets started the week lower as the European Central Bank’s president Christine Lagarde comments that Eurozone is not done with the inflation and the interest rates will continue to increase. Moreover, investors are concerned that the fresh lockdowns in China could affect the supply chain. In addition, global markets had gains in the middle of the week after inflation in Europe came less than expected and stood at 10% in November. Also, Federal Reserve Chair Jerome Powell suggested the central bank to start slowing the pace of interest hikes from December. This had a positive reaction on the market, with the NSDQ jumping 4% on the day, the 10-year yield moving below 3.70% and the US dollar falling around 1%. The week finished with the strong November jobs report. The U.S. economy added 263,000 jobs last month, more than the 200,000 expected, while the unemployment rate remained at 3.7%. This was considered as bad news as it shows that the jobs market is still resilient on FED’s tightening policy. Furthermore, the Dow Jones gained 0.10% at the closing bell on Friday. The S&P 500 declined by 0.12%. Moreover, the DAX edged up 0.27%. The CAC 40 dropped by 0.17% and the FTSE 100 stood flat at the close.

Yields advanced after the better-than-expected nonfarm payroll employment in the United States rose by 263,000. Regardless of Federal Reserve efforts to slow down the pace of interest rates. The yield on the 2-year Treasury increased to 4.352%. Short-term rates are more sensitive to Fed rate hikes. The 10-year Treasury yield, hit 3.598% down, about 1 basis points. The 30-year Treasury yield, which is key for mortgage rates, hit 3.658%. The spread between the US 2’s and 10’s narrowed to -75.4bps, while the spread between the US 10-Yr Treasury and the German 10-Yr bond (“Bund”) narrowed to – 168.6bps.

The US Dollar moved lower this week after a Federal Reserve official said rate hikes moved lower. Specifically, the dollar initially jumped on Friday after the hot November jobs report, but then retreated as market concerns prevailed. Therefore, the EURUSD traded higher at 1.0537. Furthermore, the GBPUSD ended the week higher at 1.228 and the USDJPY traded near 134.38 on Friday. Following a period of high volatility for US Dollar, the United States will release Initial Jobless Claims on Thursday 08th of December, which is expected to confirm an increase on Initial Jobless Claims to 230K.

Oil and Gold traded lower towards the end of the week

Gold started the week with losses as investors were concerned over the comments from Federal Reserve regarding the monetary policy. However, Gold traded higher in the middle of the week following a forecast of smaller interest rate hikes by Federal Reserve. Gold traded lower at the end of the week after nonfarm payroll employment in the United States rose by 263,000. Prices of Oil moved higher on Tuesday, after OPEC+ talked for production cut at its December meeting and on the prospects that China could be loosening its COVID-19 restrictions. However, on Friday, the prices of oil futures decreased, ahead of a meeting of the Organization of the Petroleum Exporting Countries and its allies (OPEC+). Meanwhile, in the Crude Oil Inventories report on Wednesday, an increase is expected in the number of barrels held by US firms by 9.822M. 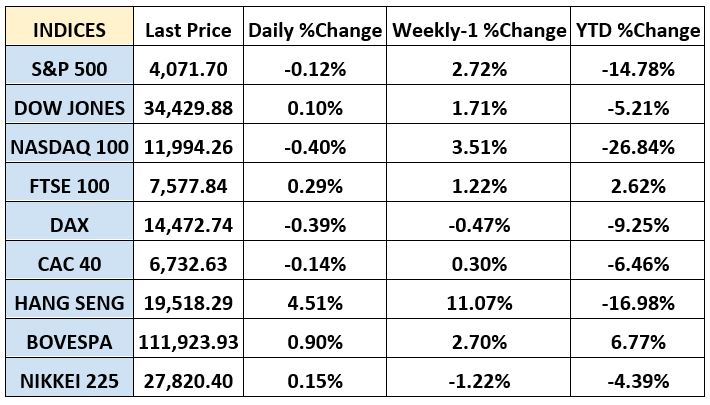 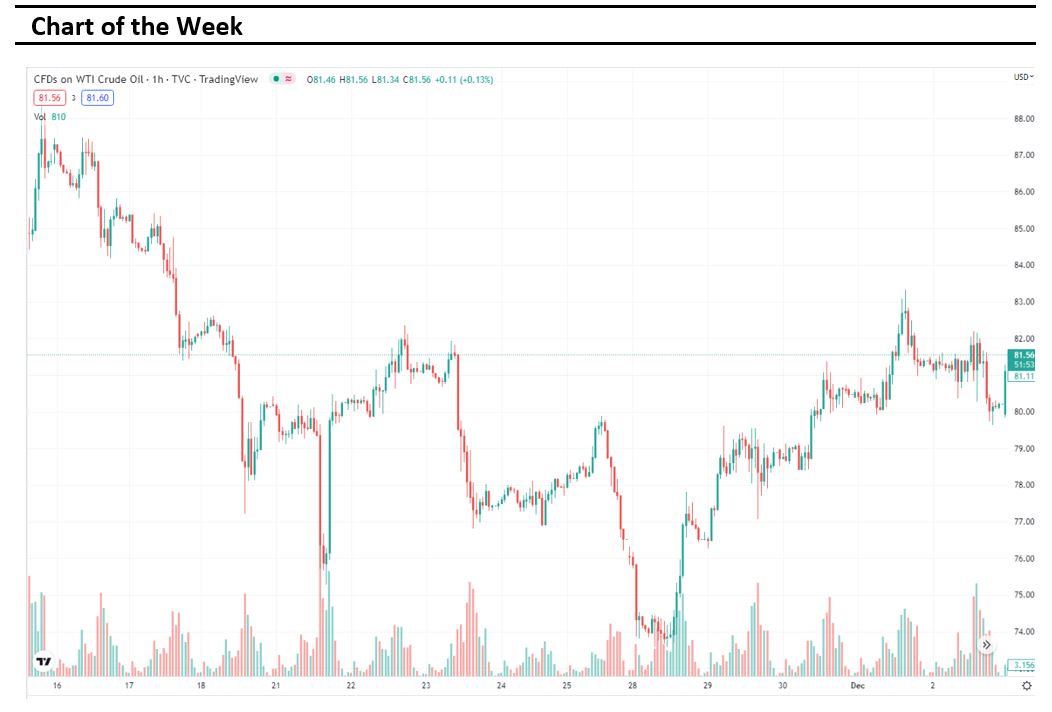