Posted on October 25, 2022 by Andreas Pattichis

Global markets finished the week in Europe mix and US higher

Global markets started the week with gains after Investors look forward to the release of the inflation report in the Euro Zone. In addition, investors are optimistic about the result of economic and earnings reports. Later in the week inflation in the United Kingdom went up by 10.1% on an annual level in September, matching the record set in July and coming in slightly higher than analysts projected, which initially moved the market lower. However, the Equity markets closed mix in Europe following the resignation of Prime Minister Liz Truss. Therefore, Markets on Wall Streat closed Friday in the green after an earlier report from the Wall Street Journal stated that some Fed officials are concerned about overtightening with considerable rate hikes. The Dow Jones gained 748 points or 2.47% at the closing bell on Friday. The S&P 500 rose 2.37%. Moreover, the DAX declined 0.29%. The CAC 40 slid 0.85% and the FTSE 100 rose 0.37%.

Treasury yields falls after a potential slowdown in Fed hikes

Yields declined after a report that some Federal Reserve officials are concerned about overtightening with rate hikes. Market expectations for a 0.75 percentage point hike in December dipped after the report, though a hike of that size in November is widely viewed as locked in. The yield on the 2-year Treasury fell more than 12 basis points to 4.481%. Short-term rates are more sensitive to Fed rate hikes. The 10-year Treasury yield, which hit 4.337% at one point during the session, fell less than one basis point to 4.219%. The 30-year Treasury yield, which is key for mortgage rates, jumped 12 basis points to 4.335%. The spread between the US 2’s and 10’s tightened to -29.6bps, while the spread between the US 10-Yr Treasury and the German 10-Yr bond (“Bund”) widened to -181.9bps.

GBP/USD ended the week at of 1.1250, Prime Minister Liz Truss resigned after 44 days in office, after failing to order the financial system. In addition, Consumer prices in the United Kingdom went up by 10.1% on an annual level in September. Also, despite of possible recession a report from the Wall Street Journal stated that some Fed officials are concerned about overtightening with considerable rate hikes. The EUR/USD pair jumped at the end of the week at 0.9863, while USD/JPY is at 150.41.

Gold started the week with gains as investors react to uncertainties related to inflation and the energy crisis. Gold traded lower in the middle of the week after as the yields rose but gold managed to increased a little bit at the end of the week by 0.76%. Prices of Oil held steady Monday, after investors worried that economic storm clouds could foreshadow a global recession. The prices of oil futures gains on Friday, as traders weighed up slowing economic growth on the back of higher interest rates as well as cuts to supply from a group of top producers. 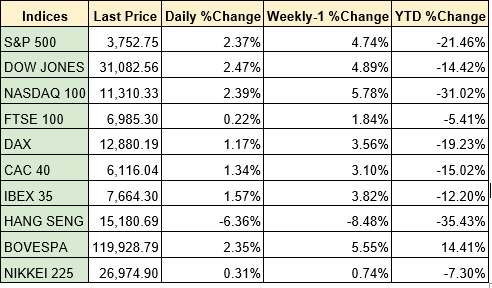