Posted on November 23, 2022 by Andreas Pattichis

The news this week were generally good, but this was not reflected in global markets as it was a relatively flat week. The US producer price index (PPI) report was better-than-expected, showing that inflation pressures are moderating. Also, Wednesday’s retail sales came with stronger-than-expected data as they showed a 1.3% increase in spending. That means that the consumers remain resilient despite the fact that the policymakers continue to highlight that more rate hikes are needed to smooth inflation. In addition, investors were bracing themselves for the inflation to be published this week in Europe and UK. Markets were mostly lower after the October CPI in Europe came in lower than expected, still arriving at a record high of 10.6%. The UK inflation reached 11.1%, so it came out much higher than expected. Furthermore, the Dow Jones gained 0.159% at the closing bell on Friday. The S&P 500 rose by 0.48%. Moreover, the DAX gained 1.16%. The CAC 40 went up by 1.04% and the FTSE 100 surged by 0.53%.

Yields advanced after Federal Reserve officials suggested interest rates would go higher still, after recent economic data had given investors hope about inflation easing. A smaller than expected rise in consumer prices for the month of October and last week annual inflation has given investors hope that inflation could be coming down. The yield on the 2-year Treasury raised to 4.51%. Short-term rates are more sensitive to Fed rate hikes. The 10-year Treasury yield, hit 3.819% up, about 4 basis points. The 30-year Treasury yield, which is key for mortgage rates, hit 3.932%. The spread between the US 2’s and 10’s widened to -69.1bps, while the spread between the US 10-Yr Treasury and the German 10-Yr bond (“Bund”) widened to -181bps.

The British pound moved higher this week after the better than expected inflation report in UK. Moreover, in the United Kingdom retail sales increased by 0.6% in October, which was slightly more than 0.5% which was expected. This was welcomed by the market as the GBPUSD appreciated to 1.1894. Furthermore, the EUR/USD ended the week lower at 1.0329 and the USDJPY traded near 140.32 on Friday. Following a period of high volatility for US Dollar, the United States will release Initial Jobless Claims on Wednesday 23th of November, in which is expected to confirm a rise on initial jobless to 225K.

Gold started the week with gains as investors are betting that the federal reserve would ease off on big interest rate hikes following inflation data. Gold traded lower in the middle of the week following United States economic data. However, Gold traded slightly higher at the end of the week as of Thursday as Federal Reserve officials boosted the dollar with the prospect of more interest rate hikes. Prices of Oil traded lower on Monday, as supply concerns stormed the global oil markets once again. However, oil dropped more in the middle of the week, as Iraq’s State Organization for Marketing of Oil said that the Iraqi Energy Ministry is aiming to increase crude oil output rates. The prices of oil futures remained lower on Friday by the uncertainties over demand in China. 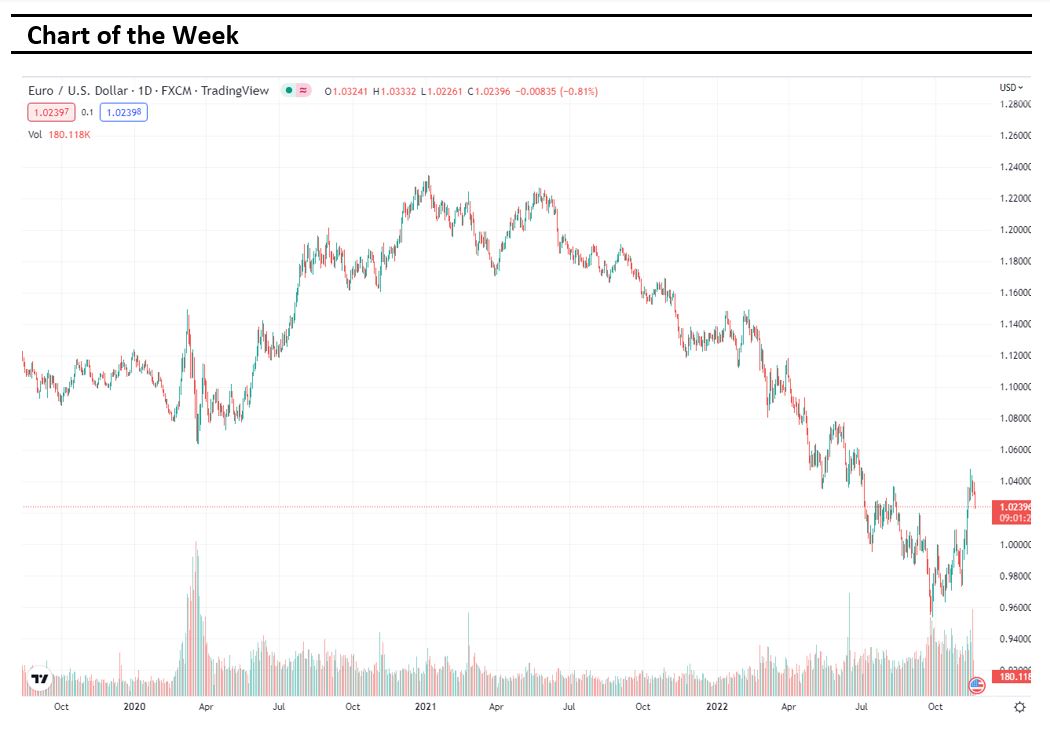